“Get Your Finger Out Of Your Ass And Win”

That headline is the text message that Tiger Woods sent to Rory McIlroy after he won the Arnold Palmer MasterCard Bay Hill Invitational on Monday. The actual words in the message are no big deal. This is how guys talk, and we say much worse to our friends when trying to inspire them to take some form of action. I’m guessing the text to Rory actually said, “get your finger out of your vagina”, but Rors cleaned it up to share with the golf journos salivating for something juicy about the $woosh duo. If Tiger’s message said what I think it really said, was that Eldrick’s subtle/notsosubtle way of telling his little buddy to play golf and stop dicking around with his girlfriend? Call it a hunch, but don’t plan on seeing Tiger standing at the bottom of a run next time Lindsay Vonn is slaloming  down a mountain. 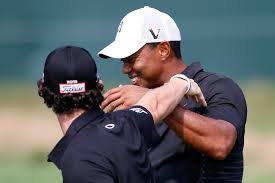 Whatever the text said, message sent. Tiger isn’t stupid, he knows having his worthy rival step his game back up is great for golf, the upcoming Masters, and Nike sales. Problem is, I don’t think Rory ‘got’ the message. Weeks ago when it was obvious McIlroy was struggling and he walked off the course at the Honda Classic it was rumored that he would add an event to his schedule to sharpen his game. Bay Hill being a somewhat premier event seemed like the obvious choice. Palmer himself has even (jokingly) stated he’d break Rory’s arm if he kept no-showing on the King. How do you turn down Arnold Fucking Palmer? Alas, Rory continues to do so. He must have more important things to do. 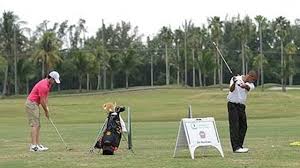 You see that picture above? Looks like weekend hacks warming up that the local muni, right? It is. That’s the municipal golf course driving range in Key Biscayne, FL where Rory was spotted practicing in between his girlfriend’s tennis matches. What the fuck!? Hey, I’m all for supporting your woman in her career, but if she’s busy playing in her own thing, what does it matter if you’re a few hours up the road taking care of your business? On top of basically telling Palmer to go fuck himself, watching tennis, and shooting shots at a muni when you have only few weeks until the Masters makes no sense to me. But what do I know? Watch him run away from the field and hide to win Houston and Augusta by a combined 20 shots.

Rory did mention that the folks at the muni were good about leaving him alone to practice. He said he picked the course because it was just a few miles from where he was staying and close to the tennis facility where he attended matches. Can you imagine going out to hit a few balls that morning to find the (at the time) number one ranked player in the world pounding nuggets in shorts right there next to you? The golf world is a small world.

This entry was posted in Tour Talk and tagged $woosh, muni, Rors, Tiger. Bookmark the permalink.