When the stars stay home and par is a good score, most tournaments lose their shine and fall under the radar. The Tampa Classic was set up as a dog this weekend because the field was weak and most of the country shifted it’s focus to college basketball and bracketology. Even with high scores and low expectations I think the tourney held it’s own thanks to the crowded leader board. Like this year’s college basketball tournament, the winner’s circle was wide open and full of possibilities coming down the stretch with 16 players starting the final day within 3 shots of the lead.

You Never Forget Your First

Have we seen this before? It felt a little bit like Michael Thompson’s 1st win at the Honda two weeks ago, didn’t it? Congrats to Kevin Streelman on snatching his first victory on tour today. The Midwestern kid from Wheaton, Illinois was the best player on the course and earned the victory by closing the field out with solid all around play. He drove it the best, putted the best, and managed his game the best. NBC noted that when they talked to Kevin last night he said he played conservatively in the past when he had the lead and he’d change that approach and stay aggressive to try to win the Tampa Championship. His strategy paid off and no shot displayed this more than his tee shot on the par three 13th.

Streelman took the drama out of the finish by hitting fairways and greens once he got his lead. With this victory, he kept the streak of only Americans winning this year’s tournaments on the PGA Tour. Boo Weekley finished two hours earlier with a sizzling 63 and had to sit around and wait for someone to post a better score. Boo told TGC’s Steve Sands, in Boo-bonics, that his wait would cancel his afternoon plans to go “fish’n” in Orlando. Poor guy. As Streels closed the deal NBC showed Boo leaving the driving range and essentially waving the white flag conceding victory. After his win, Streelman noted in his interview how he was a broke journeyman not too long ago. I recall that Gary McCord once mentioned how Streelman worked at his club, Whisper Rock, so he had a place to practice while he played the mini tours. Streelman claims to have living in his car during these years. During the interview he also dropped his sponsor a nice endorsement and credited god and the bible verse he and his caddie took inspiration from today. That’s no shock considering the town Kevin is from is known for being extremely religious. Before today, Streels might have been most well known for his Lemonhead head cover, now he’ll be known as a PGA Tour tournament winner.

I had Sergio in my pick’em this week. So did half our pool, therefore I took no interest in his follies down the stretch as I could gain no ground on the leaders. Jim Furyk choked away another chance at victory. At his age, you have to wonder if he will EVER win again. Luke Donald appears to be rounding into better form just in time for the first major of 2013. Jordan Spieth finished high enough to earn temporary status on tour which allows him to have unlimited sponsor’s exemptions for the remainder of the season. That’s good for golf. This kid is exciting and he’s going to be a star. After a hole in one last week in Puerto Rico, Spieth again holed an iron shot this week, from the fairway this time.

John Daly showed his ugly face in Tampa and missed the cut. I know you’re shocked. Why am I mentioning him? 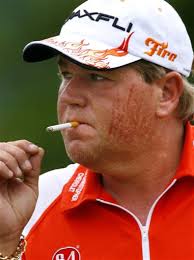 Only because he made some kind of undocumented tour history on Friday. On his 12th hole, but third on the course due to him starting on 10, he carded a 10. John hit it in the tree line, tried to punch out, took a penalty, tried to punch out again, etc., etc., up and down and 1 putt for a 10. Of course he’s done this before. This was John’s 15th (yeah, read that again……MOTHER FUCKING 15 TIMES) double digit score on a hole for his PGA Tour career. That’s pathetic. I can count on 3 fingers how many I’ve made since I began playing competitively. It goes to show you how John’s game mimics his life. Lots of bad decisions that snowball on him. There’s no video of Daly’s latest gaffe that I can find. This isn’t even close to his worst number, remember, he made an 18 at Bay Hill in 1998 when he had a Tin Cup moment. I know you guys haven’t forgotten Kevin Na’s 16 from San Antonio last year….wait… you have? Well, here it is again:

With Johnny Miller sitting this one out (more validation that this event is a dog) there wasn’t much to gripe about or even pick on NBC for. They were solid as always. Poor Raj was working his ass off out there. NBC didn’t know what group to put him with on Saturday because the players were packed so tightly together. Once things shifted, the producers got Raj up to a contending group and off the guys falling back. Nice move. Their graphics and break downs were pretty good. I think it would help them to bring out a guy like Michael Breed on Saturdays so he can break down swings for us. It would work so long as they shifted the focus away from the technical shit on Sunday. No one on NBC’s current roster can compete with what Kostis and Faldo give you in that regard on CBS. I also enjoyed the addition of Frank Nobilo to the crew. Frank did a nice job on loan from TGC. I could see him replacing Miller if he were to retire (if Monty didn’t want the job).

If you follow me on Twitter you might have taken the hint that I was in Chicago most of the weekend watching Big Ten basketball. Between games on Saturday I ran into Andy North and Steve Stricker. I didn’t make contact with North. North lets everyone in the building know he’s there, by the way. You can’t miss him. Stricker is the exact opposite. I caught Stricker in the concourse as he was laying very low and looking incognito. I hesitated to even bother him, but I couldn’t resist jokingly asking him for a putting lesson as he stood in line for a snack. The classy Stricker gave me a sheepish smile and politely declined. He went unnoticed by 99% of the people in the building. It’s amazing to me that a super star in a major sport can do that in this social media driven world. But there he was, blending in, Badger fan gear, just doing his thing. Good for him.

Back home today I got in a round of golf. I’m not sure how much more winter bullshit weather I can take. I took my hacks on the temporary greens and tees my local course sets up for winter play. I found the hole on the 4th green to be interesting and I thought I’d share it with you here for a laugh. The green doesn’t get much light so it was still covered with white stuff and ice.

It’s hard to hole out when the pin is stuck in the ice covering the cup!

Have fun filling out your bracket this week before it takes a shit on you Thursday. Stay tuned for Bay Hill and Tavistock talk.