I know most of you are thinking that due to the title of this post and my warped sense of humor this entry will have something to do with Tiger or Adam Scott ascending upon the town of Augusta and it’s young, virginal women. That simply isn’t the case (today). Instead, I’m providing you with my anecdotal to-do list for those of you heading to the Masters for the first time this year. I hope you find it helpful. 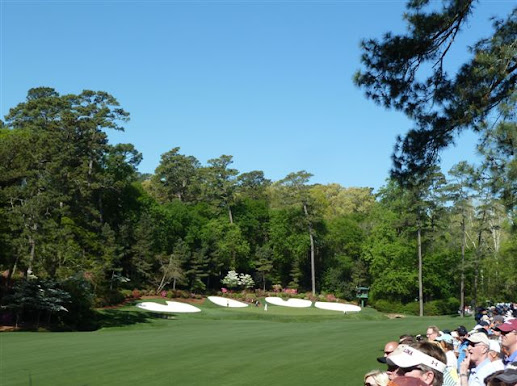 The Church Of 18 Holes

September 2, 2010 was my lucky day. I played 36 holes at two top 100 golf courses and returned home to find an envelope casually included in the pile of mail my wife left out. I noticed the Augusta National logo on it immediately and my heart raced. I felt like the kid in Willy Wonka finding a golden ticket. This was my letter from Augusta National Golf Club (ANGC) telling me I’d been given the opportunity to purchase 4 practice round tickets at $36 each. 364 days later I became a father, and if you ask me, that’s one of only a handful of life experiences that tops going to the Masters for your first time. 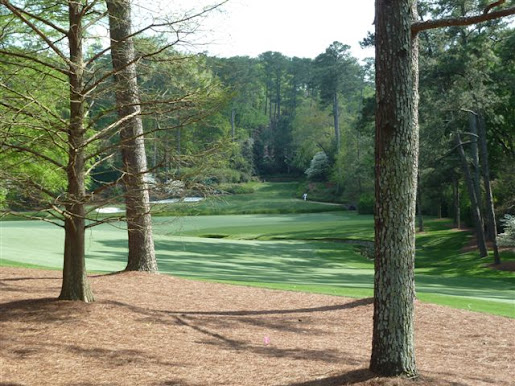 Making your way to ANGC just to watch a practice round sounds silly when you read it. What is all the fuss? But anyone that has done so understands the religious experience a golfer has as they enter the grounds. Everything you’ve ever heard or read about the place lives up to the hype.  After much anticipation, you clear security and the merchandise area and the course finally comes into view for you. No blade of grass is out of place, no cloud is in the blue sky above and the large scoreboard on the first hole tells you exactly where you are. You almost have to pinch yourself to make sure you aren’t dreaming or didn’t die and enter heaven. No bullshit, it’s that good.

Most of you are golf nuts, like me, so you already know how hard it is to get tickets to the Masters. Thursday through Sunday admittance has become nearly impossible unless you’re in the know or have dead relatives on the ticket list. Once upon a time practice round tickets were easy to find, however, increased demand for them caused Augusta National to move to a lottery system to disperse the Monday, Tuesday, and Wednesday tickets.  When I first entered their lottery they asked for my social security number (seriously), home phone, employer, date of birth, if I I was a democrat (joking) and a few other personal bits of info.  My guess is they used this data to profile potential patrons by checking credit scores to ensure they were less likely to sell their tickets to scalpers and be more likely to spend money on Masters merchandise. It seemed like I was giving them a kidney just to get on the list, but it also seemed ‘worth it’.

In recent years the Masters has moved their lottery system online and even made Thursday/Friday tickets available. I’ve yet to hear about anyone ‘winning’ 1st and 2nd round tickets. If you’re curious about the online lottery, check out the ticket section of the Masters website for more information. 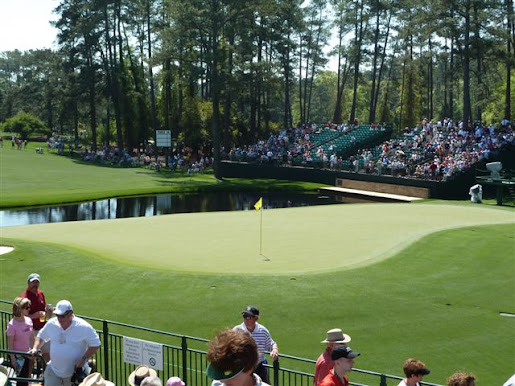 It doesn’t matter who you go with. Good friends and family will obviously make it more memorable to you, but I’d go with Hitler, Sadaam, and Martha Burk if they gave me an invite. If some vendor/client through work offers to take you and you find him to be as annoying as jock itch, ditch the fucking prick by losing him in the crowd and watch the action by yourself. You’ll never be alone because 25,000 other people will be wandering this wondrous place doing the same thing as you. 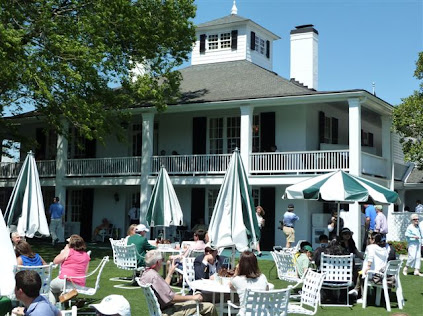 Play With Your Balls

If you’re coming to Augusta from north of the Mason-Dixon line you’ve likely just had a long winter and you’ll absolutely have to schedule a few rounds during your trip to the Masters. If you don’t play you’ll regret not taking advantage of the mild spring weather and southern courses in peak conditions. Additionally, all your thoughts of Augusta National will get you so golf-horny that you’ll have golfer blue balls if you don’t get 36 in at some point on your trip. There aren’t a lot of course options in the area unless of course you’re tight with the membership at Sage Valley or Augusta Country Club. For the budget conscious there is a fun muni that I enjoyed (on different trip) right in Augusta that the Augusta State University golf team calls home. They jack the rates up a bit that week and tee times are still hard to come by so book your round early.  For those looking to spend more freely, the Palmetto Golf Club in Aiken, SC (just across the state border) opens its doors to golfers willing to pay the freight for Masters’ week. The Palmetto Golf Club is a popular attraction, even at that price, because it was designed by Alister MacKenzie (co-designer of ANGC with Bobby Jones). If you can’t get on either of those, try the Cocks…..errrrrr…. home of the USC Gamecocks golf teams, Cobblestone Park, which is about an hour away near Columbia, SC. I’ve played it twice and enjoyed it, but don’t expect many amenities, they’ve been working on their clubhouse for what seems like a decade. If you’re driving to the tournament, play different courses on your way to help break up the drive and rid yourself of golfer blue balls. 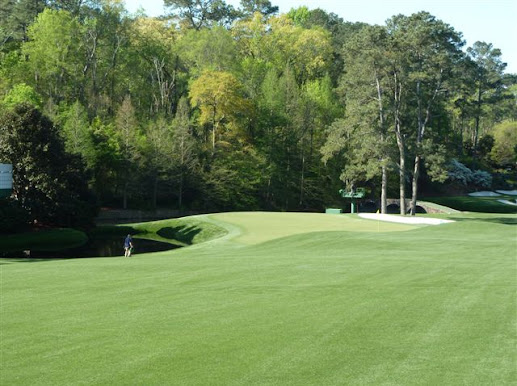 Bring plenty of dough, but you won’t need it for food and beverage. Sandwiches for the patrons are about $2.00 each. Drinks are cheaper, besides beer, but even the beer is cheap. I had at least 5 drinks and 3 meals in one day on the grounds and I doubt I spent $20.00 total on food and beverage. What you will need your funds for is the merchandise area. You’ll want to buy everything you see, and you should. There’s something for everyone. Sure they have shirts, hats, pullovers, etc….all the stock shit, but there’s so much more……shot glasses, playing cards, stuff animals, money clips, coasters, sweaters, stuff for your wife…whatever, and it’s all made for the Masters. Buy early and often.

There aren’t many in Augusta or even near by. Like the golf courses, the ones that are there raise their rates this time of year. Don’t sweat it, just plan on getting a room about an hour+ away and book early. 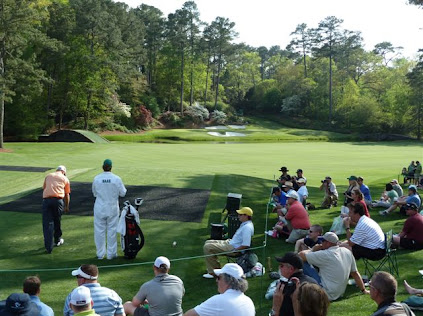 Phenomenal book about Augusta National experiences. I bought it based on the Itinerant Golfer’s review on his site and it has not disappointed. Even if you’re not going, it’s worth the read. While you’re there check out his other book reviews for additional reading pleasures, he’s got good taste.

Last I knew they still don’t allow phones at the Masters, not even for practice rounds. Leave your phone in the car because you can’t even have it to take pictures. Remember that old digital camera you have somewhere in your house that you thought was obsolete? Well, pull it out and put it to use. The pictures you take during an Augusta practice round will become your golf porn. You don’t want to leave the premises without a shitload of them. If you’re attending Thursday through Sunday: 1. Fuck you, I’m jealous; 2. You won’t need a camera because you can’t use it anyway.

Tough call on this one. When selecting practice rounds in the lottery system, remember that the Par 3 contest is Wednesday. It would seem to be a patron’s dream to attend, but it also means the big course gets shut down early and many of the stars go home to rest. If you want to see more of the players on the course, opt for Monday or Tuesday tickets. 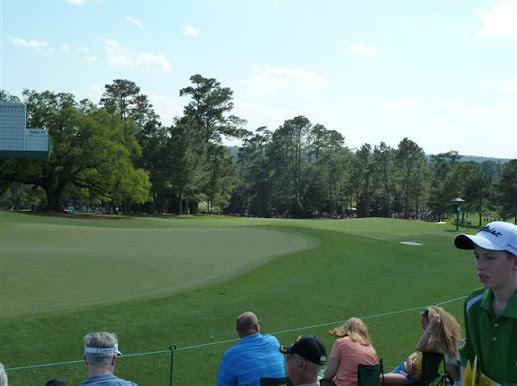 Try the famed pimento cheese sandwich. Just do it. I wasn’t sure what to think of these things as they look like something the poor kids would bring for lunch in grade school. They’re fucking delicious. I’m hooked on them. The recipe I’ve grown to like is 1 part mayo, 3 parts Swiss cheese, with ample amounts of sliced pimento thrown in. Spread on white bread. Enjoy. The ANGC does not make their recipe public. 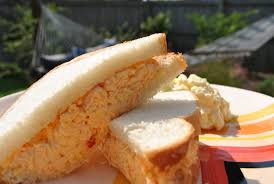 Go To The Range

If you have time, see the practice facility. You might not appreciate it like I did, but it is simply the greatest practice area ever built in golf. The club acquired property in fairly recent years and built this Nirvana just for the tour pros that come here every spring. It is immaculate. You’ll likely notice it after you pass through security and are walking to the  course. If you don’t appreciate it’s aesthetics, you’ll at least be in awe of the shots you see the players hit. 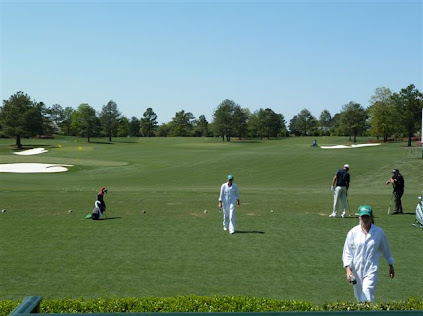