Holly Sonders nude, I’ll say it one more time…….HOLLY SONDERS NUDE. Oh ha! That was for the thousands of you that went looking for Ms. Sonders nude over the last week or so that ended up here at my site. Sorry I got your hopes up, but I’m not a smut peddler. How dare you come here for that (tongue firmly in cheek)! I hope you didn’t take this joke too hard. If you want more Holly see my post from last month about her, honestly, that’s all I’ve got. If you’re still looking for the nudie pics of her that got pulled from the web, good luck in your fap search. Back to golf.

There is no truth to the rumor that the rest of the field in Miami glued the shoe trees of Steve Stricker to his DryJoy Tours last night for giving Tiger a putting lesson that obviously worked. I touched on this a bit in my previous post, but who knew this little tip from Strick would end up blowing the field out of the water. Tiger’s short game, save the first year he worked with Foley, has always been the strongest part of his game. It has saved his ass from his inaccuracy off the tee throughout his career. That’s how he won at Torrey Pines earlier this year, Memorial last year, etc. Credit his putting all you want because he was incredible on the greens and led the field in strokes gained from putting.

What I’m not hearing enough credit for is what Graeme McDowell noted in his post round interview. He highlighted Tiger’s control with his irons, how accurate he was and how great his distance control was. GMac is dead on with that observation and he should know, he got to watch it all up close over the last 36 holes of the tourney. Yeah, Tiger made everything, but he made them because he left his approaches to the green close to the hole and in the right spots. Besides some awkward shots from bunkers, I can’t recall a shot Tiger hit to a green where he left himself a putt that wasn’t make-able (3rd shot at 18 with tournament clinched not withstanding). Making birdies on 40% of your holes over 4 rounds is fucking amazing. And think about this for a second…..Robert Garrigus has played fairly well so far in the 2013 season…… Tiger beat him by 31 shots.

Will he win at Augusta? Who knows? He looked great at Bay Hill last year before he got to the Masters and shit the bed. I think his game is more ready for a major now, but I still question his ability to keep driver in play. Time after time this weekend he missed fairways on par 5s and had to lay up and settle for par or make birdie the hard way. You can’t do that at Augusta and win unless the weather sucks for the whole week and you’re Zach Johnson. There were times where the driver looked good, but as Johnny Miller pointed out, he’s only moving it left to right and there are tee shots at Augusta that need to be shaped the other way. Did you notice what TW did on 10 today? He hit an iron off the tee 260 yards and then poked 5 wood 290 yards over the green. That’s not a bad strategy on that hole with a huge lead and most of the field laid back there too, I just don’t think that screams confidence with the driver. I don’t see that changing in the next 31 days.

I’m still trying to decide how I feel about the non-red shirts Woods wore this week (see below). The wife thought they were hideous so I tend to go with her opinion, but honestly, I don’t mind them. Schwartzel and Watney had on similar styles. The #twitternerds didn’t take too kindly to them, but those fucktards know nothing. Some of the comments were geared toward the fact that the pattern on the front and back of each garment looked completely different and therefore gave the look that the player was wearing two shirts at once. I guess, but that seems like a desperate reach of a criticism. 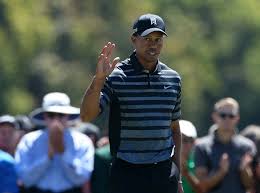 Then there was Rory. While I was dead wrong on how Tiger would fair this week, Rory did about exactly what I figured. Struggle early, gain confidence thanks to no cut, and finish strong with said increase in confidence. His bogey free 65 today was a thing of beauty in the most difficult conditions the field faced. Rors played his last 26 holes in 11 under par. I think we can finally stop talking about his equipment change. He’s only playing the Houston tourney between now and the Masters, which I think is a mistake, but that still gives him (hopefully) another four rounds to get his shit together before he drives down Magnolia Lane.

Another fairly clean week from NBC and TGC. Miller was Miller, Hicks was his standard boring/canned announcer self, and Raj was, well……Raj. Same for Koch. These guys are pros, but they just don’t give you much that makes you listen to them unless Miller gets cranky. They don’t detract from the golf they are showing, but what do they add? Perhaps they just feel that Miller fills that void (when he’s cranky) and they don’t need to have anyone on their broadcasts trying to up him. The best thing they did was limiting our exposure to Donald Trump. Considering that he owns Doral, they probably did the best they could in this regard, it could have been far worse.

Speaking of the Donald, did you see the Peter Jacobson impersonation of Donald Trump? If not, be glad you were clicked over to a college hoop game for that segment. Jacobson makes you appreciate the snooze that the other NBC ‘talent’ puts you into.  Jake Trout (as he calls himself) has lost me. He thinks he’s Feherty, McCord, and Lanny Wadkins rolled into one announcer. He’s none of them and his weekly spotlight during the NBC coverage has become DVR fast forward time.

TGC offered up what they call ‘spot light coverage’ on their network while NBC did it’s thing on Saturday and Sunday. I wonder, does anyone watch it? I happened upon it as George Coatzee was deciding what to do with his ball in the water off the tee at 18 today. Scott McCarron was on the scene to give us some details and explain the shot a bit. It was great how they explained Coatzee’s use of his rain gear to hit the shot, and even better that the camera guy got close enough to show us how the water was making the ball oscillate near the bank of the pond. Coatzee received a ruling that he was allowed to hit an oscillating ball from a hazard, to which McCarron offered a nugget from his playing days when he let an oscillating ball at Colonial move 100 yards down stream before he hit it out of a hazard on to the green. Good stuff.

I Can Almost Smell It

No, not violent flatulent that is brewing in my dog from my kid feeding it too much bacon. I’m smelling azaleas, magnolias, and pimento cheese sandwiches…..we’re getting closer, so I’ll leave you with this picture I re-tweeted from golf pro Ed Bowe this evening to get you in the mood (I’m seductive like that). If you’re reading, thanks for sharing the pic Ed. 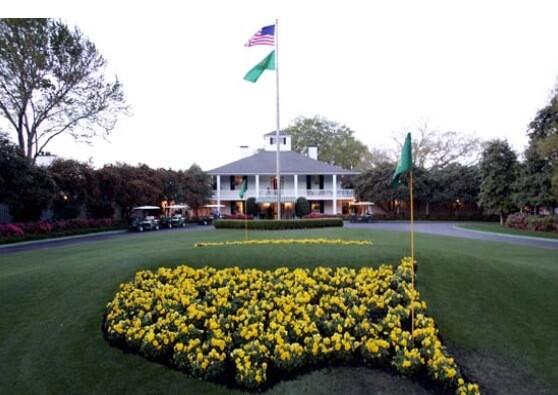