Boring. That’s the nicest thing I can say about the action over the weekend at the 2013 edition of the Honda Classic. Everything about it was boring. The stars faltered, the weather and course conditions made par a good number, and the winner took the drama out of the last few holes by hitting quality shots and capitalizing on his good fortune.

That’s Michael Thompson, and before the Honda he had exactly 1 (yes one!!!) Fed Ex point to his name this year for finishing last of the players that made the cut at Torrey Pines 5 weeks ago.  He hacked it around Riviera in his last start and missed the cut. Somehow he stayed focused, worked hard, and got his game to do a total 180 in the last two weeks to come out and win the Honda Classic. That’s an amazing turn around (most notably for your mental state) and he has attributed a great deal of it to his faith, god, #jesusgolf, etc. Thompson beat a world class field by playing solid golf all week, but he also took advantage of some breaks he got along the way, especially today.

At 10 he hit is 2nd shot on the long par 4 well into the trees and past the gallery. He ended up with a great lie in pine straw and a shot to the green. He hit a little spinner to 4 feet and saved par. On 11 he miss hit his 2nd shot yet it cleared the hazard by a yard and again he saved par. On 17 his putt appeared on the verge of lipping out and it stayed down (that’s when MT gave the ball a Happy Gilmore “get in your home” lecture). It wasn’t a true roll and it could easily have spun out and left him tied for the lead on the 18th tee. Instead, every thing went Thompson’s way and he calmly birdied the 18th to beat Geoff Ogilvy by 2. I tip my cap to him. His win appears to be a very popular one with his peers.

I don’t know much about Michael outside of what NBC told us today. I recall him being in contention at last year’s U.S. Open and I knew he played collegiate golf at Alabama. If you’re looking for more on him, check out his wife’s blog of the couple’s tour life here.

I’ll try not to hurt myself patting myself on the back, but did I not tell you a few of the early leaders on Thursday that put us in the time machine would miss the cut? Hello Camilo! O’Hair, Kuehne, etc……no where to be found on Sunday. Great to see Geoff Ogilvy back on a leader board. He was rock solid in the final round and was one of the handful of players to card a round under par on the day. Ogilvy went flag hunting down the stretch to at least make Thompson sweat. He also hit the shot of the day when he holed out from off the green on 16.

The 2006 U.S. Open champ will now be a popular pick in the upcoming events due to his fine play this week. He’s also quoted as saying how much he loves to play Doral. Don’t be shocked if he’s back in contention as soon as next week.

For the 2nd week in a row the golf world reminded me why I have a day job. Last week’s Web.com winner Kevin Foley and this week’s rookie star Luke Guthrie were playing in the same local amateur events as me just a short time ago. Now they’re both on their way to super stardom with great showings on their respective tours. Congrats to both for their fine play. Guthrie showed the world that he has “it” with the way he held up under intense pressure and difficult conditions over the weekend. There is no shame in a 3rd place finish when you’re 23 years old and are 3 months removed from your last college class. I could see him having a sneaky ‘rookie of the year’ type season the way Keegan Bradley did two years ago, minus a major.

I’m sure by now anyone reading this is well aware of Friday’s WD from Rory McIlroy. He was +7 thru his first 8 holes when he hit his 2nd shot at the par five 18th (his ninth) in the drink. Rory didn’t take a drop or attempt to finish the hole. He simply shook hands with Mark Wilson and Ernie Els and left the course like he had just been poisoned and had to get somewhere quick to find the antidote. He murmured something about not being right dentally…. errrrrr……… mentally as he walked off and later had his and Nike’s PR folks explain that he was suffering from pain in his wisdom teeth/tooth. 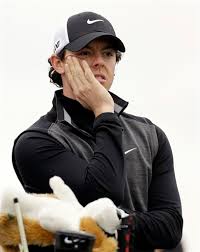 Oh boy. As if we golfers needed the sports world to think we’re bigger pussies than our pastel, country club, docker ad image already indicates…..now the best player in the world can’t hack it with a tooth ache? Somewhere on Friday Ronnie Lott had a good laugh. No, I don’t think Rory actually quit because of some dental issue. I think he was incredibly frustrated and didn’t want the embarrassment of carding an 80 something. Why finish if you’re not going to make the cut anyway? Some would argue he owed it to the fans that paid for tickets to see him. I agree with that, and I’ve never voluntarily WD’d from a tourney no matter how bad things got, but I can certainly give Rors the benefit of the doubt. He’s shown to be a stand up guy and pretty open with the media about most issues. I think the Nike deal has put some immense pressure on him that he’s having trouble adjusting to. I also think he’s flat out rusty from not playing, practicing etc. His performance next week at Doral will be like an ant under a magnifying glass in the sun.

With the colossal bore of a tourney that NBC was given it’s hard to trash them for their work this weekend. They were fine and the coverage they provided was fairly boilerplate. We probably could have used some better graphics to show us wind direction and breaks on the green but whatever. I still can’t figure why we don’t get better audio on caddie conversations. Can’t the networks just place a mic on the bag somewhere?

Johnny Miller seemed a bit bored too. Perhaps Nicklaus stepping into the booth kept him in line a bit. He did call out Beiber……errrrrr……… Fowler by questioning why so many kids want to emulate him when he’s only won once on tour. Even Nicklaus agreed with Miller there. Miller’s comments about how Tiger needed to win a few more Masters to make a run at Jack’s major record were dead on. His point was that TW should be picking off green jackets like they’re low hanging fruit (or a Perkins waitress) on his way to filling his bucket with major championships, yet he hasn’t won one in close to 8 years. Nailed it. Nicklaus and Miller also got into the anchored putter debate. Johnny wavered some (as he has) but in the end agrees with Jack that it is strange to ban them now after 40 years. Both think the PGA Tour should, in the end, comply with what the USGA decides as their final decision. This stalemate will never end.

That’s the wardrobe Nike picked out for Tiger on Friday. Barf. The #twitternerds were killing him for looking like a fucking bumblebee. I can’t disagree and laughed when I first saw him on TGC’s telecast. Sadly, this isn’t Woods’ biggest problem. He’s now shit the bed in two straight events since his win in San Diego. Augusta is coming up quick and his game doesn’t seem to be trending in the right direction. I’m not expecting dominance, but breaking par would be a sign of progress. When he talks about his game he seems to be in denial. He’ll tell Steve Sands how great he hit it, but his putting was off, or how he just needs to stop taking penalties……..bullshit. The numbers don’t lie. He’s lost off the tee again and can’t hit his scoring clubs close enough to go low. He’s got problems in multiple facets of his game. Doral and Bay Hill (his next two events before the Masters) set up well for his faults and good rounds there could again be fool’s gold that his game has turned around. If Vegas has an over/under for his 1st round at Augusta this year you’ll make easy money betting the over if it is set around 70.5.