Have you seen this yet? Yup, just another abortion of an advertisement from #Taylormadegolf. I have no idea how they come up with these and I’m not sure which is worse, this one or the one I referenced in January? The $woosh is killing them in the Clever Department, now if only they could catch up in sales and the actual quality of their equipment. Here’s the ad if you haven’t seen it.

If you’re just waking up from a 5 year nap and looked at the Honda leader board today you wouldn’t have thought much changed. Sean O’Hair, where have you been? Boo Weekley? Camilo Villegas? I don’t think Camilo has a top 10 since 2011. Christ…..even Hank Kuehne made an appearance on the good side of the projected cut. When was the last time that happened? Don’t worry about Hank, he doesn’t need golf, remember the former U.S. Am champ is married to one of the tennis playing Williams sisters. Oh look……there’s Jeff Overton too! It’ll be interesting to see where this group end up on Sunday. One good round on Thursday doesn’t mean shit. 72 holes tells where your game is and I’ll guess a few of them blow up tomorrow and even miss the cut.

On that note, another blast from the past and former World Number 1 hacked it around today at PGA National. No, not Tiger. David Duval shot a rock solid 8 over and is just a eyelash away from being DFL. His shot on the par three 15th was incredibly awful. Lucky for Double D, NBC/TGC have a microphone hidden near the green in the water to rock your sub-woofer every time someone hits a John John (that’s a shot that doesn’t make it over the water). When DD’s water ball touched down at 15 even Maltbie and Koch made jokes about the noise being heard across the golf course.

I’m not talking about the game where whomever 3 putts last has the snake. Before he teed off today Boo Weekley heard that some marshals had spotted a poisonous 18 inch snake and needed help removing it before it hurt someone. Super Boo jumped right in to save the day. A swamp critter and Boo….we shouldn’t be surprised. 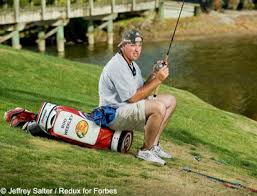 According to reports, he didn’t even lose a bit of chaw in the process. BW merely pulled out his driver and used it to wrangle the snake out of harms way, then calmly walked over to the first tee and shot a tidy 66. Sounds like Boo is finally healthy and could win again soon. I hope he does only because his post round sound bites are priceless and I’d selfishly like to hear more of them. It seems like 20 years since we watched his galloping Happy Gilmore antics at the Valhalla Ryder Cup matches.

Get To Know Amanda Balionis

You can follow Amanda on Twitter @Amanda_Balionis. She gives great….ummm……. updates during tournament action which can be very handy if you’re not watching live or near a television. Additionally, she’s a rabid Steelers fan and a Hofstra grad. If you’re looking for nude pics of Amanda, don’t bother, I’ve done your home work for you. If you just have to see more of her search for her videos on YouTube where you’ll find an entire collection of her work for PGATour.com.