The West Coast swing of the PGA Tour has lost days of play this year due to high winds (Kapalua), fog (Torrey Pines), and snow (this week). Tour officials have to wonder if the Mayan Calendar was simply off by a couple months. Play began per usual on Wednesday morning of this event under cold and overcast conditions. Things quickly took a turn for the worse before any matches could be completed as 2 to 3 inches of white stuff fell on the property. Play was halted for 26 hours and much of the field did not even start their match. This is the 2nd time in 3 years the course has seen snow accumulate on it during the the WGC Match Play. It’s time to move.

When Rory and Tiger lose in round 1, so do the networks carrying the tournament and the main sponsor of the top 2 players in the world. It’s a little sad for the fans too, but the true junkies will get over it because there will be plenty of good golf to fill the void they leave behind for the next 3 days. It’s amazing to me that these two could be sent home within minutes of each other so similarly to how they left Abu Dhabi in January. Plenty of jokesters around the #twitterworld commented on how Nike probably sent Air Swoosh to pick them up so they could carpool home to Florida, somehow I doubt Phil Knight was laughing.

For Tiger, he told TGC’s Steve Sands that he didn’t play bad, he just got beat, and that neither he or Chucky 3 Sticks made a bogey all day. My eyes tell me differently. He might not have hit bad shots, but TW only made two birdies. He didn’t have his yardages dialed in as he flew flags and left shots with scoring irons miles from the hole throughout the round. At the same time, CH3 hit a pile of great shots and this match would have ended sooner if Chuck could putt. More interesting was the fact that Howell said himself that he had never beat Tiger anywhere, anytime while playing in the same group. That’s a big mind fuck to over come today. Good playing Band Pants. 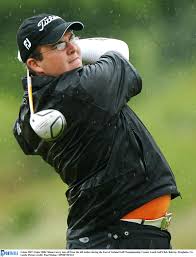 Who’s this you ask? No, that’s not the kid from Jerry Maguire all grown up. That’s Shane Lowry, the porky pro from Ireland that beat the #1 ranked player in the world today. How the fuck did this happen? Well, Lowry chipped in on back to back holes and followed that up with a 3 foot conceded eagle putt. Explains it a bit, doesn’t it? Lowry also had no fear of McIlroy because the two are friends and have played plenty of golf together. Figure that and the rust in Rory’s game and you have the recipe for an upset. After his round today McIlroy has played 1 more round of golf than me in 2013. He didn’t lose because of his equipment (although that ugly red driver is hard to watch him swing), he lost because he’s not putting in the work on his game. On the pivotal 15th hole of today’s match, Rors hit a smother hook off the tee, a left handed shot to a bunker from a shrub, and skulled the bunker shot back into the desert. Time to stop chasing the homely tennis chick and start working on your game young man. Augusta is not that far away. His rounds at next week’s Honda will be played under a microscope.

There Were Other Matches

I was shocked at what Jason Day did to Zack Johnson, that was a woodshed beating. I don’t think my entire bracket got fucked, but I did lose a finalist in Ryan Moore. Moore got prison-sexed by Furyk in fairly quick fashion. A great match that went under the radar was Marcel Siem v. Luke Donald. Luuuuuuuuukkkke took his sweet time about it but he eventually put away the pony-tailed German by making birdies at his last two holes. Jason Sobel tweeted the following after the last putt dropped:

Luke Donald defeats Marcel Siem. Keeps alive his lengthy streak of beating opponents who have their hair in a bun.

Another quirky match was Sergio Garcia v. Thongchai Jaidee. Yesterday when the snow started flying Sergio had a 12 footer to win. The horn blew and Garcia was forced to wait on hitting that putt. When play resumed he three-putted with the touch of a rapist and lost the hole to TJ. The match went to extra holes where at one point Jaidee had his own 10 footer to win on the 19th green. Sergio gave his glove to his caddie, emptied his pockets of tees and balls, and took his hat off to prepare to shake hands with Thongchai. TGC analysts pondered if this was gamesmanship or Sergio being the self defeatist that he is. I’m really not sure, but I would probably go with gamesmanship. Sergio learned that shit from Ollie and Seve’. He’d stick his finger in your ass while you putted if he could. Garcia went on to win on the 20th hole.

HELP SAVE THE MATCH PLAY!!!

There are still 5 rounds of this tournament to be played in the next 3 days, but having Tiger and Rory gone before the weekend and snow delays twice in 3 years is a sign to me that something needs to change. First, move the event. No more snow. The course isn’t that exciting and the 3000 foot elevation makes it susceptible to these snow squalls in February. Cabo has better weather and Nicklaus’ courses by the dozen if you need to play on one. Better still, why not put this thing somewhere that fans would want to attend? I’m guessing starting the Florida Swing a week early and playing matches at Seminole isn’t happening, but I like to think big. Perhaps the Streamsong courses are even an option. The tour could use one course for the Championship singles matches and the other for the consolation matches.

Consolation matches? What’s this? Tell me more you say? With only 64 guys in the field and losing half of them after one match, why not take the 32 losers and make them earn their paychecks? No more 45k for showing up. Keep the winners shares the same, but put another million in the consolation bracket. No money to anyone in the consolation field except the winners. Yes, WINNERS, that’s plural. How? Team matches. Play four ball matches with 2 man teams. Make the losers of the first round pair up with other losers to form a team and play more golf. The networks, sponsors, and fans all win by keeping the stars around for the weekend. Can you imagine if Tiger and Rory teamed up in the consolation to play 4 more rounds of match play? I’d bet the USGA would be please to see this happen on the coat tails of their announcement of the new four-ball event. Think about it. The consolation might even draw better than the championship.