Home Boy (Wins) In His Hood: Final Thoughts On Riv

That scene is about the only thing I could think of when I saw John Merrick win his first PGA Tour event over the weekend at Riviera. Merrick grew up in Long Beach, CA, played his college golf for UCLA and attended this event as a fan when he was younger. I doubt he or any writer in Hollywood could have written a more fitting script.

Did the guy that played the best win? Depends on how you define it. From tee to green this was Charl Schwartzel’s tournament to lose. His ball striking was as impressive as that shag rug of chest hair clawing to get out from under his shirt, yet Charl twitched on the greens and found himself on the outside looking in at the two man playoff. 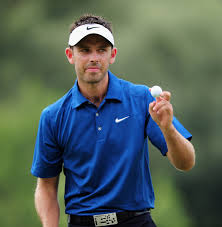 Merrick was the only player among the leaders that was chasing tour victory #1 which makes his calm demeanor and nonchalant touch around the greens even more impressive. In theory he should have been the first to crack from the pressure, however, Merrick’s short game was superb in all facets and that’s why he won. Are you sensing a theme in the games of this year’s winners on tour? Short game. Short game. Short game. In most weeks the guy that gets it up and down and makes clutch putts wins. It sounds so simple.

While it was nice to see Charlie Beljan compete without the health issues he had at Disney, watching him and his nervous energy bounce around the fairways down the stretch make me feel like I’m watching a cartoon character. Beljan is a likable guy to most golf fans, but degrading the 10th hole after you just lost a tournament on it makes you look like a little bitch. In case you missed, CB referred to the 10th as some kind of miniature golf hole with a windmill. While I appreciate his honesty, next time, just say you got beat and move on. That’s the wrong time to bash a hole that most consider a classic (insert Pam Anderson joke here).

As the tourney unfolded the Twitterworld got feisty on the topic of Freddy Jacobson’s shirt. The Junk Man or Swedish Houdini, whichever you prefer to call him, wears a different style/brand of shirt that tends to come untucked during the lunge he calls a golf swing. Maybe it is the way he untwists on his lash with a driver that does it. Or perhaps the pot belly he has defies gravity and pulls the shirt out of his trousers as he moves. It doesn’t fucking matter what the cause is……..the traditionalists want it nixed. Seriously, they’re out for blood. I even saw some people saying he should be fined by the tour. Personally I don’t care how he wears it, I’m not his clothing sponsor and I could give a shit how he looks on the course, but let’s hear your opinion. How do you feel about Shirtgate?

There is no other way to say it, CBS absolutely sucked. Maybe this was their attempt to let the course and the play speak for itself, a less is more type of thing? Whatever it was, the energy was low until the end I felt like they mailed it in after a long stretch of events for the crew. Feherty and the gals won’t be back showing us our weekend fix until Augusta and that’s just fine at this point. While I’ve been generally complimentary of them so far this year, Sunday was pretty much……. meh…….. as the kids say. Nantz was up to his nipples in cliches per usual, Faldo kept marveling at how far the ball goes (fucker does it every week), and we barely heard from McCord. I’ll give Feherty a pass. He didn’t register with me. Did Kostis have the week off? I don’t recall hearing him or having him break down a swing. I guess I’d also need a week off after the celeb suck fest at the Clam Bake last week. The best nugget we got all day came from Ian Baker-Finch (IBF) when he noted that the trio of recent CBS 18th hole golf analysts were all winners of the tour event held at Riviera CC (Ventury, Wadkins, and Faldo).

In an effort to illustrate ball flights and give the viewer data on player tee shots CBS used Trackman technology they call ProTracer. This was supposed to show us the flight and shape of tee shots (it did) along with data on how far the ball carried and rolled (it did not). The 2nd part was a total cluster fuck of a failure. What made it even worse was that the data given to the viewer wasn’t questioned by IBF who was calling most of the ProTracer shots. On 11 Merrick knocked a drive dead down the middle of the fairway and the tracer graphic showed it was straight as a stick. The sound you heard let you know the shot was struck pure as did Merrick’s reaction to it. CBS told us at that point that the ball carried 231 yards and rolled 99 for a total of a 332 yard drive. Shot Tracker confirms the ball traveled 332 yards, but I call bull shit on the carry/roll yardage. Most tour players have a ball speed of over 160 mph with a driver. Under ideal conditions with no wind this equates to about a 275 yard carry. Merrick was heading downwind so I’d guess his tee shot on this hole actually traveled about 285 in the air and rolled close to 50 yards. In my opinion, inaccurate data was provided with every instance in which the ProTracer was used and CBS not addressing this was an absolute whiff.

Their worst gaffe of the broadcast? They left the playoff after one hole to show 60 Minutes unless you were in the Pacific time zone. Did we learn nothing from the Heidi game? I know  I could have switched to The Golf Channel, but my DVR doesn’t know this information. I schedule live broadcasts to record an extra hour on Sunday to avoid missing action. I should be covered damn it!!!!! Thanks for the shit taco CBS.

1 Response to Home Boy (Wins) In His Hood: Final Thoughts On Riv