Great field at the Riv this week, but not much yet to talk about after 1 round. The stars didn’t do much unless you consider Kuchar a star. However, the interwebs got us through another chilly winter day with some interesting happenings from around the golf world. 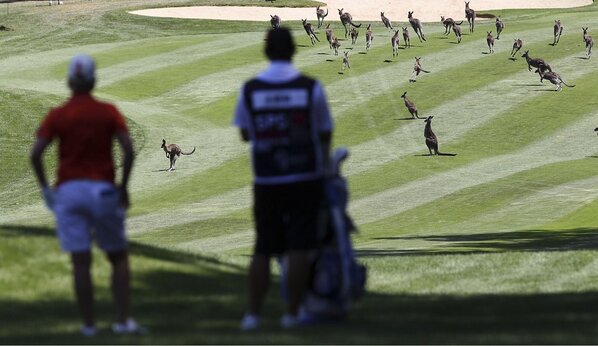 Where is Mick Dundee when you need him?

This is an image from the Women’s Australian Open. It’s pretty unbelievable to see for those of us who’ve never golfed down under. Golfing in Northern New Jersey and Northern Michigan might give you a similar view with deer clogging up the fairway. Amazing pic. Seems like a sheep dog or something similar like they use to keep geese off our golf courses would do the trick here, but what do I know?

If you don’t like Tom Doak, just skip to the next bold face type you see. If you do, check out this feature golf.com had from him today. They asked him to live chat with course architecture nerds and I really enjoyed it. He discussed his favorite holes, courses, who he’s worked with, the Olympic course, Nebraska’s sand hills area, and much much more. Here’s the link. Doak Just press the replay button and the live chat should show up for you to view. He got in some good shots at the R&A and what they’re doing to St. Andrews’ Old Course just before he broke for lunch. Thanks Tom.

Every year around this time when the L.A. Open is under way the early tourney talk centers around how the pros will play the devilish short par 4 tenth hole. Fred Couples discussed it at length and noted that back in the 80s/90s the green was more receptive and you laid up to 80 yards, stuck your wedge, and made 3. He’d tell his caddie, Joe LaCava, to mark a 3 on the card before he even hit his tee shot. Couples and Ernie Els both noted that now the green is so firm that you’re forced to hit a driver so you’re closer to the green and can chip your 2nd shot. You take your par and run is the current mentality.

There are plenty of options off the tee here and it is always a fun hole to watch the best of the best play. I personally think it is a bit over-rated. I like it, but being played in the middle of the round takes some of the excitement from it. Last year part of the sudden death playoff was contested on it and that was must see golf.

Plenty of other good/great holes to see and discuss this week at Riviera. The Itinerant Golfer covers the grounds for you in his review you can find here: Itinerant Does The Riv

The fear of spiders is not a laughing matter to some people. Personally, I am not bothered by them and apparently neither is Daniela Holmqvist. This bad ass home girl was bitten by what she was told was a poisonous black widow spider at an LPGA pre-qualifying tournament. Did she seek immediate medical attention? Nope. She saw her leg swell and took action. Daniela used a golf tee to poke and prod the venom out of her leg, then…….SHE FINISHED HER GOD DAMN ROUND!!!!!! Shot 74, no big deal, could have died. Turns out it was the less poisonous cousin of the deadly black widow, but it’s still a great story.