That’s how much money Snedeker has made in PGA Tour events (including his Fed Ex bonus) since missing the cut at the PGA in 2012. Jealous you say……who wouldn’t be? I love my life but Sneds makes me feel like a homeless ass clown. Brandt wrapped up another win on tour in seemingly easy fashion today to make it 2 in his last 10 starts. These ten starts also include 3 runner up finishes and a handful of top 10s. Winning at Pebble puts him in the clean up spot (4th) in the world rankings. If he’s the new Superman, Medinah and the European Ryder Cup team are his kryponite because that weekend in Chicago is about the only place he hasn’t recently shined.

As he putted out on 18 CBS gave us the obligatory family shot of the Snedekers and because of this I know you’re all wondering what I thought of Mrs. Sneds. She’s cute and at first glance gives you no reason to chew your arm off if you were to wake up next to her after a wicked bender. I’d say she’s outstanding for a woman having birthed two kids, but then I found this shot of her above sans sunglasses and it knocked her down a peg (#sunglasshot only). Still, homie has a great life, congrats to him on winning and being the best golfer on the planet right now.

You have to love the simplicity of his game, swing, putting stroke, pace, etc. Kostis’ breakdown of his swing in slow-mo was perhaps my favorite part of today’s broadcast. He showed us why it works, just the basics, on plane, no wasted movement…..perfect. With a $10 million check already cashed from Fed Ex, what is left for Sneds to do? That’s probably what David Feherty was thinking too when he asked Brandt about winning a major immediately after the last putt fell. Great job by David to bring this up. Sneds needs to win a major to validate his place in golf and he knows it. I hope you got your bet down on him when I told you to do so after San Diego because the odds for him winning at Augusta have now been slashed in half.

Phil Phalls On His Wallet

Phil played this week, yeah, I know you don’t believe me. Where was he you ask? Bungling around the rocks and playing shitty for the most part. That’s why CBS barely showed him. I think he finished his round today before Nantz and his cronies came on the air. He did make the cut which means he’ll be writing the IRS a check for $8825.70 for his work at Pebble (Tax-Meter updated). However, after hitting his tee shot into the Pacific on Saturday, a funny thing happened to Lefty that got the interwebs buzzing:

Ouch. Well, you wear metal spikes and walk on slippery rocks and you get what you deserve. I hope only his pride was hurt.

When I saw the leader board yesterday I found myself pulling for James Hahn to win this thing. I wasn’t a fan of his faggy little Gangnam dance in Phoenix last week, but I like his story, his game, and his brother toting his bag for him. If you don’t know the story try that Google thing.  I figure if you’re here reading this you already have heard it, but I could sum it up as ‘Jeremy Lin of golf’. Was that racist? Another great swing break down by Kostis showed us what Hahn is working with. Great lines in his swing too and almost as simple as Sneds. Nice work Pete. I hope Hahn wins soon so he’s known for more than a Youtube dance.

Kevin Stadler (aka Walrus II) showed up at Pebble, which is all too fitting with all those Sea Lion shots we get during coverage. Jason Day appears to have his game back from the dead. Jimmy Walker keeps cashing large checks. And lastly, the guy that yells “MASH POTATOES!” at every tour event made his presence felt on 15 tee today. Nice.

This is a tough week for CBS. They strangely feel that they have to cover all the celeb bullshit for the bulk of their coverage on Saturday. You can read gripes about that anywhere so I’m not going to do it here. On Sunday they typically show pros only unless of course an amateur is in contention for the team title and hitting a crucial shot down the stretch. We should have seen more Tony Homo…..errrrrrrrr…….. Romo today as that mother fucker made 16 birdies and an eagle BEFORE Sunday to carry his team to the top of the leader board. Instead we had to watch Sned’s partner hack his yellow ball around all too often. There was no reason to show this guy save the last hole when it mattered. I hear he’s a member at Augusta and I’m guessing that had something to do with his excess airtime. 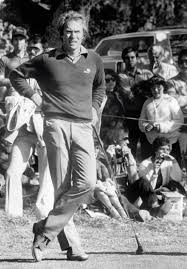 I noted that Feherty and Kostis were both really good at their jobs on Sunday when called upon. I’ll go easy on the other guys this week, but we can’t gloss over Clint. Clint Eastwood is clearly losing his marbles which means I’m all for him being in that tower on live air for a few hours after he’s had a couple of cocktails. It’s like he’s a ticking bomb about to say something horribly funny/wrong.  The moment this happens it will be great television. Until it happens we’re bored watching this old fart drool in his pudding.

Where Nantz and Sir Nick dropped the ball was Saturday when they had Condi Rice in their little studio and didn’t ask her about her membership at Augusta. I know CBS and the men of the Masters are in bed together and it would have been a huge corporate gaffe to ask this, but it’s something that should have been asked in some capacity. WHIFF.

Finally, the ad wizards of Nike released this for their new driver over the weekend. The spot is clever and funny, so give it a look. The irony of it is that it shows Tiger and he’s not actually using the driver being promoted (in the ad or on a real golf course). False advertising? Probably not, they’re not claiming he does use it.