I attended the Ryder Cup last fall at Medinah – Friday sessions only. Having played the course before it was a treat to watch the event in person, a bucket list sort of thing since I’ve been to a few PGAs, a U.S. Open, and a Masters.  When I left for the day the American team had a controlling lead and things only got better for them on Saturday. Being there was a cool experience. It was a college football game brought to a golf tournament. If you ever have the chance to attend one don’t pass it up.

Holding a 10-6 lead going in to Sunday a U.S. win seemed inevitable. I didn’t want to waste a beautiful fall day watching all 7 hours on TV so I made a tee time and DVR’d the NBC broadcast to watch later that night. By my 15th hole I knew the results via smartphone and my day was ruined. Until this morning I had only seen the highlights of that day. Seeing the words “Ryder Cup Final Round” on my DVR playlist was like living with a ghost.

It took a snowed in ugly February morning to finally force myself to go back and watch the broadcast. Not surprisingly, it was just as painful and made me just as mad as I was in the middle of the 15th fairway at my local course on that September Sunday. DELETE, YES, DELETE, YES I’M FUCKING SURE!!!!!!!!!!! Good riddance. 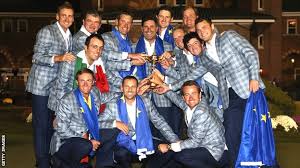 I’m not going to rehash it all because there’s no reason to kick you guys in the nuts again today like I did to myself earlier. It’s really hard to fault the majority of the Americans for the loss but you can single out a few.  Furyk choked in a huge way for the 3rd time of 2012. Sneds, Stricker, and Kuchar were also pretty bad. However, the rest of the red, white, and blue played pretty well and either got beat, halved, or TCOB.

It took an amazing string of events for the European team to pull off the Miracle at Medinah and most notable of them all was Rose’s putt on 17. Poor Phil, snake bit as always. At least he didn’t have to pay taxes  for playing here.

Sorry to drag you back down in to this misery again today, I just needed to share my pain after watching this, finally. Too bad our brains don’t delete things for us like our DVRs do. Back to regular scheduled dick and fart humor with a Pebble wrap up coming later tonight.

This entry was posted in Uncategorized and tagged chokers, kick in the nuts, Medinah, Ryder Cup. Bookmark the permalink.