Posted on February 5, 2013 by shutfacegolf

Our favorite (living) Spaniard golfer with homo-erotic tendencies surfaced over the weekend in Dubai. Serg was found hacking it around on his front nine in round 2 and bitching up a storm to his caddie about how his back/shoulder hurt. He even told his looper he was going to walk off the course at the turn.  WAAAAAAHHHHH!!!!!! Then El Nino got on a heater and finished the side birdie-birdie-eagle to move into contention.

You think he walked off after that? With amazing new found health the little queefer quickly changed his tune and decided to stick around for the weekend. Garcia struggled to break par on Saturday/Sunday and eventually let his frustration get the better of him. Take a look.

The bunker must have said something about his mother. We’ve all been there, in fact, this is one of my favorite go-to temper tantrums. I think exhibited a similar nickel show just this fall while playing in an event with the head pro looking on. Thanks for the entertainment Sergio.

On to more important things. It’s not like he has an iTunes library full of Elton John and George Michael hits, but I’ve often thought Garcia had a Martin Kaymer way of life. Clearly this isn’t the case as he has always shown publicly that he prefers the company of women (when he’s not dry humping Jose’ Maria). He dated Greg Norman’s daughter for years (left) and Martina Hingis (former women’s tennis #1, on right) for just as long. While they’re not my type, they do count as proof. 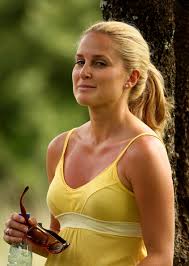 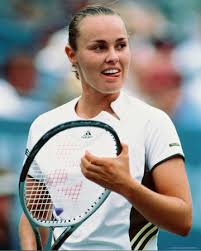 After these two he met Nicola Horrex, who as of last fall he claimed to be madly in love with and was crediting her for the resurgence in his game.

She seems cute, but I have no idea what happened to her. As Sergio mutilated the bunker in Dubai, the photogs covering the event found this girl walking the fairways and labeled her as Sergio’s GF.

To me, this doesn’t appear to be the same chick. If it is, she went from girl next door to Vegas street walker trailer trash in the blink of an eye. Can you please help me out? Photog error, Sergio moved on, or dramatic shift from cute to fugly for Ms. Horrex?

1 Response to Wherefore Art Thou Sergio?