Posted on February 4, 2013 by shutfacegolf

Super Bowl Sunday in Phoenix is supposed to be fun and exciting. The back nine at the TPC Scottsdale provides players with numerous risk reward holes that allow opportunities for eagles, easy birdies, and disaster. Phil went and took all the phun out of it by putting the tournament to bed early this weekend.

I love to rag on Phil (isn’t that obvious?), but I’m not going to do that today. I’m not going to say that the pants he wore on Thursday and Friday were lifted from Ellen Degeneres’ closet. I’m not going to tell you that his constant thumbs up to the crowd make me feel like I’m buying a used car from him with sugar in the gas tank. And I’m also not going to comment on how watching he and Bones over-analyzing every shot makes me feel like I’m locked in a room with nothing but a single television that only shows the Vagina Monologues.  You can’t make me say these things, not today, it won’t happen.

I can’t blast him today because of the way he prison-sexed the field from the opening tee shot to the final 6 inch putt he holed at 18. Phil reminded everyone just how talented he is on Thursday when he had a prom putt (that’s all lip, no hole) give him a rim job to shoot 60. The #59watch started early and blew up the #twitterworld on an otherwise boring workday.

Bitch Tits backed up his 60 with more low rounds and didn’t take his foot off the gas until Sunday morning’s front nine.  It was never even close. Phil won with ease and will be making a tidy philanthropic donation of about $692k to the IRS (Tax O-Meter updated). It’s no coincidence that Phil often plays his best when he’s inspired by Tiger and I’m guessing TW’s win last week in Phil’s backyard did the inspiring. Mickelsauce has about half his career wins on the west coast. Today he tied Johnny Miller for most wins in the state of Arizona, for whatever that means. What it does mean is that we should have seen this coming. The signs were there. Just when Phil seems distracted, annoyed, and off his game…….BAM…….winner’s circle. Weekends without Tiger and Rory need him to Phil the void. Mission accomplished.

Snedeker again played well and notched his 5th top three finish in his last 8 starts. Sneds would have won back-to-back events if Phil and Tiger didn’t exist. BS might be the hottest player on tour right now and I could see him snagging a major in the very near future. He typically plays well at Augusta. I might have to check his Vegas odds to win there.

Ryan Moore showed off his fluffy new look complete with new sponsors,  a chubby ponch, and grizzly beard. Throw in the hipster necktie wardrobe he’s been wearing for the last year and he reminds me of a fucking hobbit. I don’t even know what a hobbit is, but that’s what I think of when I see him wearing this shit. Yeah bro, you’re cooler than the rest of us for dressing like your life is the Great Gatsby. Whatever. 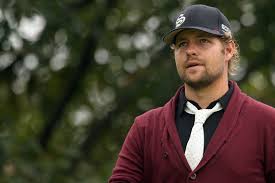 The 16th Does Not Disappoint

Plenty of action occurred at the party that is the 16th hole. James Hahn did a Gangnam dance (it was queer), Peter Jacobson debuted his latest song, Cheers And Boos (should have named it Cheers And Booze; all proceeds from the song go to charity this week), and caddie races took center stage. I really liked the caddie races. You can’t do these every week but they fit well in Scottsdale for this event. The races are organic, fun, and amusing to the drunk crowds that cheer them on. One of the later groups let the young stand bearers race to the green. The heat matching the brothers Henley against each other drew the most attention. The only thing that would have made it better would have been a broken driver shaft or putter bent so bad it couldn’t be used. Watching it live it appeared as though the bag had exploded.

Players with Oakley sponsorships passed out sunglasses. Kevin Streelman slung Lemonheads into the crowd as he does every year. Bubba tweeted all week about coming up with something entertaining for the fans on Saturday, yet his best idea was to give away Ping visors? Weak. My favorite player interaction with the crowd at 16 was shockingly displayed by Paddy Harrington, a Scottsdale virgin. Paddy is sponsored by Wilson Sporting Goods who provides the NFL with game-ready footballs, specifically, the balls used for the Super Bowl. On Saturday, as he stood 8 under for the day thru 15 holes, Paddy threw and punted a handful of Wilson footballs into the intoxicated masses once his tee shot found the green. Nicely done, mick.

On to to Pebble.