Ahhhh the 16th at TPC of Scottsdale, professional golf’s most amusing collection of drunks, tight bitches, and drunk tight bitches. If you’re reading this I’ll go out on a limb and assume you’re aware of the hole’s reputation (I’m not talking about Lindsay Lohan) and its involvement in the Waste Management Phoenix Open. Once again some 20,000 raucous spectators will surround it from tee to green to create a coliseum setting and make true stadium golf for the next four days. The crowd gets exuberant and parties well into the night as the atmosphere fuels the players (or scares the shit out of them) and entertainment ensues.

Take away the stadium filled with people and the little par 3 isn’t much to talk about. What makes the hole great is the uniqueness of it. They don’t do this every week on tour and, outside of the old 17th at the defunct Buick Open, nothing rivals this shit-show. Players arrive at the tee and disperse free swag, candy, golf balls, or whatever they have on them just to please the people and avoid hazing. Bubba Watson has been talking to his #twitternerds all week about what he should do when he gets there Friday afternoon. I’m hoping for something unique, but I’ll guess that he just pumps them up Ryder Cup style. It doesn’t matter what he does, the thing peaked when some youngster raised the roof right here:

In fantasy golf its a wide open pick for this one with lots of choices still available this early in the year and lots of talent to select from in the field. I’m trying to decide between Swamp Ass Garrigus and Rickie Beiber… …errrrr…..Justin Fowler……whatever. What? You don’t know why Garrigus is referred to as Swamp Ass? Let me leave you with this gentle reminder from the St. Jude in 2011. 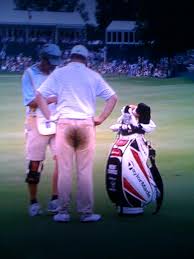 Both Rickie and Bob are playing well coming off solid finishes in San Diego. I’m leaning towards Beiber-fever because he has a better history in this event.

No, not really, but apparently he poured/sprayed deer urine or antler juice under his tongue. The deer jiz contained some banned substance that is supposed to make you heal quickly. Boo Weekley uses it to camouflage his scent while hunting, Vijay chugs it….kinda figures doesn’t it? Singh has been labeled a cheater a few times in his career and the most notable instance before this was him altering his scorecard at a tournament in India some 20+ years ago.

The guy is a prick, a dick with ears, a walking turd. Are you getting the impression I don’t like him? Ding ding…. you’re right. As a kid at a US Open practice round  my buddy and I were getting any player not named David Berganio Jr. to sign our commemorative flags (I still have mine today). Almost all of them were accommodating because, what fucktard wouldn’t sign a flag for a kid during a practice round? The round was cancelled at some point when the USGA gave advance warning that a huge storm would be hitting the area to wash out play for the day. It was at least a 60 minute head start to get the grounds cleared. Nicklaus signed our flags during this time, Tom Watson, Sluman, Leonard, etc. Everyone signed for us except Singh.

This douche who hadn’t even won a major at that point in time told two boys, “no sign, rain come”. It was still 80 degrees and sunny as he said this. I’ll never forget it. I hope they take him out of the hall of fame for use of this antler juice and strip him of his green jackets at Augusta.

This isn’t an advertisement, I just thought I’d share this little gem with you because I think its a neat product and I need to get one. I’ve yet to actually test it out myself, but it’s getting some god pub and was touted by many at the recent PGA Show in Orlando as one of the best new products for 2013. It’s called Cam Caddy and you can read all about it and order one here if you so desire.

Quite simply put, the thing holds your phone and records your swing for you while you pound balls on the range. I believe you just attach it to an alignment stick that you shove in the ground behind you and adjust the height/direction accordingly. Why didn’t I think of that? Supposedly it will fit every smartphone out there. The only reason I haven’t bought one yet is because I need the ground at my range to thaw so I can actually use it.  Winter sucks.