The golf world awoke today (or stayed up late) to watch the biggest two stars of the game go head to head in the middle east. No one was more excited than Nike CEO Phil Knight who was last seen walking around the desert night with a gaggle of hookers and a kilo of blow. The man with the best seat for viewing the headline match is Martin Kaymer, former No. 1 player in the world. This poor schmuck was selected by the Euro tour to fill out the threesome because, well…..somebody had to. Lucky him. I’m sure he’ll largely go unnoticed and post a decent score. His game has been dreadful for close to a year now and you have to suspect that his clutch performance at Medinah in the Ryder Cup will be a springboard to a better 2013. Hopefully they hit some good shots before I pass out on the couch trying to watch the show. 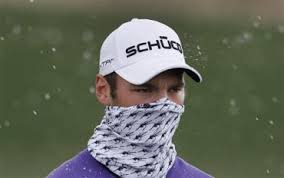 Now on to more important things related to Kaymer. Did you know he’s married? Yes, to a women. Shut the front door, right? Everyone I’ve ever discussed Kaymer with has had the same opinion that I had. He’s gay, like Turkish prison-gay, an absolute Peter-puffer. Not that there’s anything wrong with that. I just figured he liked men. Shit, I’ve called him BGG, short for Big Gay German, for a at least 3 years now.  Look at the evidence. Exhibit A above, he wore a fucking scarf-thingy in the Arizona desert when it got a little chilly during the Accenture Match Play event in 2011.  Exhibit B that got him convicted in the court of public opinion was that strange embrace he had with a man on the 18th green at Whistling Straights when he won the 2010 PGA in a playoff over Bubba Watson. Do you remember that scene? It was odd, almost like they mounted each other attempting some sort of mouth hug before remembering the world was watching. I suppose it could have been his brother and over zealous German love, but my gay-dar was on red alert upon seeing that display of affection.

The mind-fuck grows because not only is he married, to a woman, but she’s hot and makes Rory’s tennis chick look like the homely mule that she is.

That is Mrs. Kaymer, better known as Allison Micheletti. The interwebs tell me that she was on TGC’s Big Break reality show and her dad played professional hockey. Fantastic. To me she appears to have a girl next door thing going for her. She’s cute and the sexy picture above (aided by air-brushing and touch-ups) really shows her well. Kudos to Martin, I didn’t think he had that in him. I’ll have to start thinking of a new nickname as BGG just won’t cut it anymore.